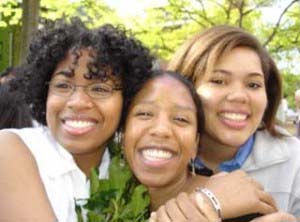 Economic democracy is essential to overcome discrimination and marginalization. Poverty and unemployment feed racism, sexism, and anger toward immigrants. Women, people of color, the young and the old tend to suffer lower wages and more joblessness in the economic downturn. Economic independence is essential for developing one’s full potential as a human being.

Due to increasing joblessness in this country, many Americans express resentment toward immigrants who travel to the U.S. for employment.  However, since job positions generally filled by most immigrants are in the unskilled and low skilled categories, the impact on overall employment rates is minimal. Once immigrants arrive in this country, promised jobs may not materialize, and many enter the ranks of the unemployed, as well. While the Department of Labor does not separate out unemployment statistics for immigrants, The Center for Immigration Studies, the best source for this information lists the unemployment rate for immigrants without a high school diploma as 10.6 percent, for young immigrants with only a high school education it is 11 percent, and for immigrant teenagers, 10.8 percent (Center for Immigration Studies, 2009).

In addition to the rising unemployment issue, women, especially, women of color, suffer discrimination due to a persistent wage gap. American women who work full-time, year-round are paid only 77 cents for every dollar paid to their male counterparts. But the wage gap is even larger for many women of color with African-American women making only 62 cents, and Hispanic women only 53 cents, for every dollar earned by white, non-Hispanic men (US Census Bureau, 2010).

Our recent experiment with globalized industrialization has done little to overcome overall worker marginalization. Decentralization underlies true economic democracy in which all segments of society are empowered to achieve full employment and financial prosperity for themselves and their families. People are encouraged to participate at every level of decision-making. In order for individuals in society to flourish, society needs community-managed institutions. In economic democracy a high priority must be placed on economic justice to eradicate the sources of inequality; on compensatory programs to overcome ongoing discrimination and the legacy of inequality; and on consciousness raising to change the behavior, attitudes, and ideas that foster racism, sexism, homophobia, ageism and xenophobia.

In Wisconsin, these problems persist despite continued efforts to ameliorate them. For instance, minority children, particularly those who come from low-income families or neighborhoods, continue to perform below accepted standards and to graduate at lower rates than do majority children. This is true both in Milwaukee, a highly segregated city when minority children frequently attend run-down schools with dilapidated instructional hardware, and in Madison (and other Wisconsin localities) where the physical school plant is more evenly accessible.

Pay differentials between men and women in Wisconsin mirror the national figures cited above. In 1981 Wisconsin passed an equal pay act designed to achieve comparable worth by eliminating pay differentials between men and women in similar occupations. Although this legislative effort was not fully successful, far right Republicans recently repealed this law. Other recent and notable efforts by ultra conservatives in Wisconsin to increase levels of economic disparity include the repeal of collective bargaining rights for public employees, efforts to reduce access to health care for low-income women and children, and attempts to repeal the rights of local authorities to have input into business and mine siting.

Center for Immigration Studies. (2009). Unemployment for immigrants and the US born: Picture bleak for less educated black and Hispanic Americans. Retrieved from http://www.cis.org/December2008