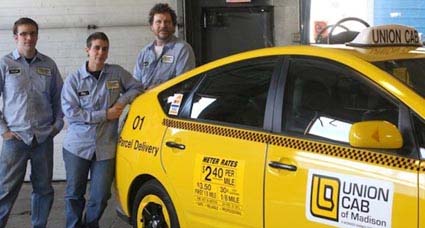 by Dada Maheshvarananda and Mirra Price

Cooperatives are the businesses of the future, based on the principle of one member, one vote. Since decision-making is decentralized, citizens become empowered to choose how their local economy should be run. Producer and consumer cooperatives should run most industry, trade, agriculture and banking. Successful cooperatives grow from the energy and commitment of local people. The foundation of the cooperative system lies in “coordinated cooperation,” in which free human beings with equal rights and mutual respect work together to fulfill a common need, for their mutual benefit.

Throughout the twentieth century and until today, cooperatives have been mostly invisible, ignored by the mass media and political leaders who are more interested in power, fame and control. Yet more than one billion people, a sixth of our global population, are members of co-ops. The world’s largest non-governmental organization is the International Cooperative Alliance (ICA), representing 246 national and international organizations.

Cooperatives provide over 100 million jobs around the world, 20 percent more than multinational enterprises. Cooperatives are also more likely to succeed than privately-owned enterprises. In the United States, 60-80 percent of companies fail in their first year, while only 10 percent of cooperatives fail during that period. After five years, only three to five percent of new US corporations are still in business, while nearly 90 percent of co-ops remain viable (World Council of Credit Unions, 2002).

The International Cooperative Alliance offers this definition of cooperatives: “A cooperative is an autonomous association of persons united voluntarily to meet their common economic, social and cultural needs and aspirations through a jointly-owned and democratically-controlled enterprise.”

One requirement vital to the success of cooperatives is moral leadership. A high degree of integrity is essential to the administration’s effectiveness. Strict accounting and organizational standards applied by honest managers will build confidence among the cooperative members and the community.

Cooperatives hold a competitive advantage over both private and public enterprises because members have a personal interest in their co-op’s success. Cooperatives integrate economic and social objectives, spreading wealth and power to each member equally. In contrast to capitalism, cooperative productivity is measured not only in terms of output and income, but also in terms of job security and happiness.

Credit unions are cooperative banks, owned and democratically-managed by their members, which give loans at lower interest rates than commercial banks. They are legally incorporated as not-for-profit cooperatives with an IRS tax exemption status. Today there are 7,339 federally insured credit unions, with 90.5 million members and total assets of $914.5 billion. Credit unions have fared far better than other financial institutions in recent years, with only 1.74 percent delinquency ratio on $564 billion in loans. In 2010, only 28 retail credit unions failed, resulting in $221 million in NCUSIF losses, but no loss to any deposit holder (NCUA 2010 Annual Report).

In traditional private enterprise, financial incentives are used to demand high standards of personnel training and development. Yet in cooperatives, even higher levels of resourcefulness, communication skills and interpersonal discipline are needed. The importance of investing in continual worker education to foster interpersonal skills as well as business management expertise cannot be overemphasized. Each member should be encouraged to further his or her education, keep abreast of technological developments in the field, and share knowledge with others. The members’ ability to contribute to the enterprise will increase, and along with it, their self-esteem. In this way cooperation and working conditions will improve for everyone.

Cooperatives provide greater job security than do private enterprises, which are not answerable to the community and whose boards might choose to relocate to where labor costs are lower. Cooperatives consider labor a fixed rather than a variable cost over the short run. This means that workers are not immediately laid off if production is cut back. Viable alternatives to layoffs include decreasing the work hours of all members, opening new lines of production or services, retraining workers, and transferring members to other cooperatives.

Cooperatives benefit the community at large by creating jobs, retaining wealth and increasing social connections among the inhabitants. The practice of economic democracy in co-ops raises awareness of democratic issues among the workers as well as in the wider community.

On an economic level, cooperatives foster regional economic self-reliance and independence from outside control, empowering local people. They create employment, circulate money within the community, and offer a wide range of goods and services. Because cooperative enterprises are owned by the members themselves, profits stay in the local area. Cooperatives thus increase the wealth and build the strength of the community.

When a labor strike in 1978 shut down the Checker Cab Company, the workers reorganized as Union Cab that is now a $6.5 million-a-year cooperative. Each of the 220 drivers, mechanics, dispatchers and administrative workers owns an equal share of the company and has an equal vote in many operations, including electing a board of directors. The average wage at Union Cab is roughly $14.48 an hour, plus health insurance, paid days off, safe-driving bonuses and end-of-year surplus sharing. And virtually every dollar that the cooperative earns stays in the community (Ginsberg-Schutz, 2012).

Maggie Ginsberg-Schutz, “One worker, one vote: Madison cooperatives offer an alternative to a system of haves and have-nots”, The Isthmus, Feb. 2 2012. http://www.thedailypage.com/isthmus/article.php?article=35857.