Home About Gender Equity in Education 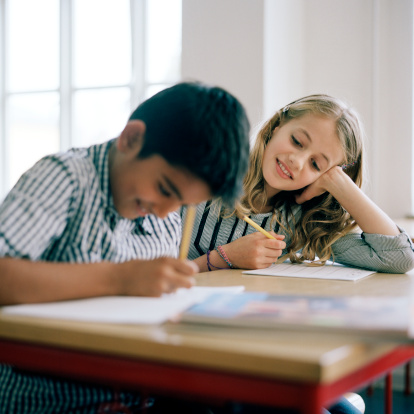 Boy and girl working together in school class

By Dada Maheshvarananda and Mirra Price

The mass media and advertising bombard us from a very young age that the value of women depends on how beautiful, thin and sexy they look; that buying the right clothes and beauty products is a key to success in life. A Harvard University study shows that 8 out of 10 U.S. women are unhappy with their physical appearance, and that only five percent are even capable of reaching the current ideal shape (Fox, 1997). The result of this mass hypnosis is eating disorders, low self-esteem and depression that plague many women who are unable to achieve that elusive commercial image of beauty.

The youngest person ever to receive the Nobel Peace Prize was Malala Yousafzai at age 17 in 2014 for her courageous campaign for girls’ education. According to a 2012 UNICEF study, an estimated 31 million girls of primary school age and 34 million girls of lower secondary school age were not enrolled in school in 2011, with Sub-Saharan Africa having the lowest percentage of gender parity (UNICEF, 2012).

In Western countries, girls’ access to education is roughly on a par with boys. However, social conditions persist which may negatively impact the educational climate in classrooms. In a 1992 American Association of University Women study, “How Schools Shortchange Girls”, findings included that in the United States, girls received less attention than boys in classrooms and were less represented in math than boys. There has been a decided rise in bullying and violence, which often prevents girls from full participation in their education. Social issues such as teen pregnancy, one-parent households, having to help care for siblings, ever-increasing alcohol and drug use, and health problems,  are all significant factors which may severely lessen the quality of education for girls, especially in public schools, which have limited resources and are sometimes in crime-ridden urban neighborhoods (AAUW, 1992 ) .

In a landmark longitudinal study, Harvard psychology professors Lyn Mikel Brown and Carol Gilligan followed the stories of 100 adolescent girls for five years. They found that when young girls in the United States reach adolescence, they start to receive contradictory expectations from parents, teachers, peers, the media, and themselves. Girls struggle with these conflicting messages, trying to figure out how to act, when to speak up, and who to please in their everyday lives. There are strong pressures from society for them to be beautiful, likable, passive and self-sacrificing. Many adolescents respond by falling into silence and disconnection from society (Brown, 1992).

Adolescent girls feel enormous pressure to attain unrealistic standards of beauty. Girls who do not fit this artificial standard of beauty face more obstacles than those who come closer to attaining it. Studies demonstrate that attractive people have distinct advantages in our society:
•    Attractive applicants have a better chance of getting jobs, and of receiving higher salaries.
•    Taller men earn on average $600 more per inch (2.5 centimeters) in the United States than shorter executives.
•    Judges find attractive people guilty of crimes less often, and if guilty, they receive shorter sentences.
•    Attractive kids are more popular in school with their classmates.
•    Teachers give higher grades to the work of attractive students and have higher expectations of them, which in turn improves their performance.
Understanding this tendency, which scientists point out is part of our evolutionary history, is crucial for overcoming bias.

The world needs quality education for all girls and women that includes:
•    Teaching women how to care for and strengthen their bodies, their minds and their spirits.
•    Learning the hidden history of women’s great contributions to every aspect of society.
•    Seeing through the imposed veils of superstition and dogmas.
•    Valuing diversity and viewing gender, racial and cultural differences among people as enhancements of our human family.
•    Leadership training to achieve the necessary self-confidence and will to apply their talents and knowledge for the benefit of society.

In the Neohumanist Education Conference in Porto Alegre, over 100 teachers brainstormed in small groups how we can help girls feel good about themselves. Suggestions included:

•    Using physical activities to relearn and appreciate one’s body.
•    Teaching dancing, singing and art.
•    Leading activities that deconstruct the social gender paradigm.
•    Explaining the theory of multiple intelligences (musical–rhythmic, visual–spatial, verbal–linguistic, logical–mathematical, bodily–kinesthetic, interpersonal, intrapersonal, naturalistic, existential, etc.) to show that each person possesses a unique blend of all of them; therefore we should respect and encourage each person’s different abilities and development.
•    Deconstructing the appeals of the media through reflection and questioning. For example, bring examples of very old advertisements to compare with current ads.
•    Encouraging each one to manifest their innate talent for their own self-esteem and to inspire others as well.
•    Dialoging in order to understand why one is not well, and helping to find a solution.
•    Practicing yoga and meditation.
•    Encouraging healthy eating.
•    Telling stories with positive images of girls and women.
•    Realizing that all people are beautiful inside.
•    Leading reflection on feminine stereotypes and women as objects in the media.
•    Laughing!
•    Valuing the different strengths and abilities of each person, remembering that no one is equal.
•    Valuing inner beauty, kindness and compassion.
•    Realizing that our culture is our strength, making each person proud of who they are.
•    Comparing society’s unrealistic image of female beauty (extensive makeup, plastic surgery, Photoshop, excessively thin) vs. the real beauty inside each person.
•    Respecting diversity.

As long as girls and women remain second class citizens, their education will continue to be second class. Therefore, the struggle to end women’s social and political oppression and inequality must go hand-in-hand with efforts to insure gender equity in education.

Dada Maheshvarananda is a monk, activist and writer of After Capitalism: Economic Democracy in Action, he is director of the Prout Research Institute of Venezuela. He may be contacted at maheshvarananda@prout.org.

Mirra Price, a retired English teacher, currently is a writer, editor and copyeditor. An activist and Proutist, she has worked in cooperatives, for many social justice causes, and has advocated for gender equality since the 1960s.