A Conversation with Theresa Small

In late September I spoke to Theresa Small who had traveled to North Dakota to stand with her people against the continued building of the Dakota Pipeline, designed to go under the Missouri River, which provides water for 18 million people. If there is a leak, everyone would lose.

Why did you go to Standing Rock to be with the Protectors of the Water?

It was a calling. I didn’t know what we were going into. We needed to be there. I felt so grateful to go.

Wherever we go, we take an offering. No matter where we go or how long we stay, we

are there to show support; we’re there to assist the energies. So I took three five-gallon bags of chokecherries and some elk meat. That’s what I was able to give of myself.

It was dusk when our charter bus pulled in. The crowd is right next to the road, in the Red Warrior camp with the flags that line the entrance in, the fire and camp crier, check in tent—all is right there. AIM (American Indian Movement) is security and they have to make it their business to know who is entering the camp, and they were there.

I had put my Northern Cheyenne Morning Star flag out the window for all to see, and a voice went up from the crowd: ‘The Cheyenne are here!’ This was followed by hollering from men and lulu’s from women throughout the camp. It was such an honor to be acknowledged.

We pulled up near the Chief’s Council area not really knowing where to go. I felt we were being guided. A lady came up and told us that we were in the place we were supposed to be. It was our place.

We put up the tent. The next morning I went to the main tent in the main camp, sang with the drummers for a bit, prayed and gave thanks, anchoring Light. I found an elderly woman and introduced myself, kneeling down where she sat. “Hello Gramma,” I said. She introduced herself and I listened to her.

Then I met a young woman cook. I needed something to eat. She said she had been called, too. I felt it was an honor to meet her.

Tribal Chairman David Archambault ll, went to Geneva to talk to the UN about Standing Rock. That must have taken a lot of courage.

Even though we are warriors and protectors, we don’t have to be in an aggressive force of protecting like warriorship. There’s another way you can just be in peace and love and have space.  Just doing what we are doing is already moving the energy of what needs to be done. The way they are leading; they have such intensity about this, but they lead with compassion, too.

When the Native American man from Denver spoke at the Boulder Rally for Standing Rock, he said that every morning there in North Dakota on the land, people prayed for the new day, prayed for the bull dozer driver, prayed for his family. I was really taken with what he said.

We’re not separate from those who are driving the bull dozers nor the ones who are in the banks and backing this. We can’t say we are separated from them because we’re whole, we’re one; we’re all on the Earth.

To arrest them for the roles they are playing for the Native Americans to stand up, standing in solidarity, to have that calling…how many times have we been called. As an individual, we’re afraid of what others think—that we’re crazy.

I prayed for this for years. Ever since I woke up, I’ve been praying for this…how…when. 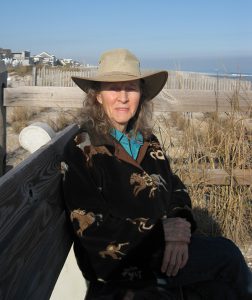 This is huge. All the tribes coming together. This is historic.

It just speaks to humanity; they have the same feeling of protecting the Earth.

So when you say historic, the word itself—when you break it down, his-story, her-story, this one that we are currently telling is an us-story.  We’re creating it. We’re the authors.

Thank you so much, Theresa.

Jyoti Wind is a writer of personal narrative, poetry and memoir, and leads women’s writing groups. She lives in Boulder, CO.