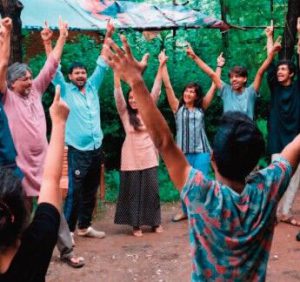 I first encountered cooperative games when I was a theatre student at Indiana University in the 60s. Some of my drama instructors used exercises from Improvisations for the Theatre by Viola Spolin, who is often called the “Grandmother of Theatre Games”. I remember playing The Machine, in which students built a machine with our bodies, vocalizing machine noises and miming moving machine parts, as we piled on to one another to make one living, moving machine. We also played The Mirror Game in which two players faced each other, and one person led movements which the other followed. These games served to warm us up and created a sense of community among our class members.

Later, in the 70s and 80s, I taught these games to my drama students on the Navajo Reservation in Arizona. Students, who refused to go onstage and recite their parts in plays, had no trouble playing these cooperative games together. Often we played a follow the leader type game, modeled on the childhood game many had played as small children. My formerly reticent Navajo (Dineh) students became more comfortable performing for others. We performed original, traditional Navajo plays, which students and their families appreciated as an affirmation of their culture and language.

Continuing in this tradition of encouraging people to learn to work together through group games, Dada Maheshvarananda has published a new book, Cooperative Games for a Cooperative World: Facilitating Trust, Communication, and Spiritual Connection. In the book’s Foreword, renowned author and activist, Bill Ayers, says: Dada Maheshvarananda invites readers to play games, but these games unlock the magnitude: we begin to imagine the future we would like for the generations to come; we unleash our spiritual and social imaginations. We are playing games, and so we turn to the children and grandchildren, and we think of the grandchildren’s grandchildren.

Anyone can play these games; anyone can learn to teach them to others, as well. In that way, a chain of love, trust, and solidarity will grow from person to person, group to group, and community to community. Playing these games is a start in building that better world we all want to see. The book may be purchased at: www.cooperativegamesworld.com.

In May, 2016 at the PROUT Strategic Planning Seminar at Prama Institute near Asheville, NC., Nina Shapiro, a masters level counselor with a bachelor’s degree in art, music and dance therapy, co-facilitated a workshop with Prakash Laufer, a master’s level dance therapist. They have led workshops together and independently for the past 40 years.

Using pre-recorded new age music they led a group of about sixteen participants in a creative process using music, dance, poetry, chanting and song. In Nina’s words: We allowed each participant to express their spiritual and creative selves, while simultaneously experiencing a collective group flow. There was a warm and loving energy in the room throughout the hour-long event and the feedback we received was very positive. Exercises included The Divine Dance*, in which each person took a turn leading the group as The Divine while the others mirrored the leader’s movements. We then chanted while dancing improvised movements to an ancient chant, meaning ‘Let Us Move Together’.

We ended with a song which we all sang together called “Light Is Returning”. Once more we were reminded of the importance of using both left and right brain capacities for full learning and the energizing capacity of group movement for experiential integration.

In today’s world of uncertainty and rapid pace in our everyday lives, sometimes it is essential to take a breather, to get out from behind our screens and interact with others in a way that enhances our mutual support. These games are face-to-face encounters with our friends, neighbors, and sometimes strangers, who all learn to cooperate and grow together through active involvement in these innovative, educational games. 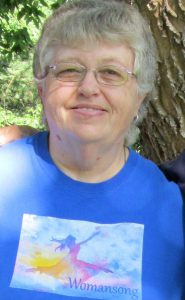