Forming an Alliance for Economic Democracy

An Introduction to the Alliance for Economic Democracy

By Shri Verrill and Alex Jackimovicz

In Madison, Wisconsin a range of grassroots activists, intellectuals, and leaders in various movements for political, social and economic change came together to convene at the 2012 Economic Democracy Conference. The conference organizers desired to connect various groups working in different fields of activity with one another and support their work to shed light on and popularize the values and goals of their work as necessary ingredients for changing the world of corporate capitalism to an economics of the people. Examples of economic democracy in action centered on new visions that humanize and democratize the economy.

A few members of the loose coalition of activists and organizers who made the conference possible wanted to continue the momentum and move forward with other projects. Thus, the Alliance for Economic Democracy (AED) was briefly formed as a new organization to carry this work forward.  However, the energy to continue quickly faded. We are pleased to announce that in January, 2017 the AED has resurfaced in Maine with a new energy and voice.

Central to the effort is inspiration from the work and writings of P.R. Sarkar. He recognized the urgent need for a new vision to democratize the national and international economy. Sarkar’s vision is inclusive of disparate elements, such as community collaboration, self-sufficiency, and environmental sustainability. Special emphasis is given to economic decentralization, which entails shortening the food, energy, and production supply chains. This moves us away from profit-centered production and toward production based on collective necessity, which meets the desire for an economy that minimizes opportunities for economic exploitation, and maximizes the all-around welfare and development of all people, and which is in harmony with the Earth.

1) Fundamental requirements for life must be guaranteed to all (such as housing, access to nutritious food and clean water, health care, and shelter)

2) An increased access to purchasing capacity as the means through which people acquire their needs, guaranteed to every individual;

3) The power to make all economic decisions must be placed in the hands of the local people;

4) Outsiders must be strictly prevented from interfering in the local economy, and the outflow of local capital must be stopped.

These four requirements for economic democracy embrace the prosperity of all beings, including animals, and plants. This expanded view differs significantly and is contrasted with conventional ideas of economic democracy because it develops concepts embedded in ethical and social responsibilities of how the economy should perform and how it should and can be designed.

Maine has four federally recognized tribes: The Aroostook Band of Micmacs, Houlton Band of Maliseet Indians, Passamaquoddy Tribe, and the Penobscot Indian Nation. Together with the Abenaki, they comprise the Wabanaki Confederacy. Wabanaki translated means “People of the First Light” or “People of the Dawnland”.

To build solidarity with the Wabanaki and educate the community, the AED hosted an event called “Healing in the Dawnland: An Introduction to Struggles for Indigenous Sovereignty in Maine”. Three short films were screened. The first highlighted the continuing effects that the disproportionate removal of Wabanaki children from indigenous communities and into the state foster care system has on Wabanaki people today (at a rate over five times greater than “non-Native” children). The second film described the Penobscot’s struggle to maintain their centuries’ old stewardship of the Penobscot River in terms of water quality standards that ensure a healthy ecosystem that supports sustenance fishing, hunting and gathering. Finally, a short clip was screened to let Maine citizens know about the role the Maine Attorney General’s office is playing in the attempted territory theft, a literal ‘land grab’ of the Penobscot River from the Penobscot People in an ongoing law suit, Penobscot v. Mills.

The AED is also developing a document to expand the discussion around divestment from the Dakota Access Pipeline (DAPL) toward divesting from the speculative economy altogether and reinvesting locally in the peoples economy. In short, activists can and must take the next step and put our collective financial energy into forming the world we want to see, and decouple from corporate capitalism to the extent we are able. We must move our money (MOM) from Wall Street to Main Street. How do we do that?

The major obstacle is that 99% of the 30+ trillion dollars that U.S. Americans have invested is in long-term savings, i.e., stocks, bonds, and pension funds etc., and less than one percent is invested in our local communities. This isn’t by chance.

Securities laws were designed for the benefit of large publicly traded firms, and until very recently, regulations made it nearly prohibitively expensive for small businesses to provide financial disclosure in order to ‘go public’ and acquire capital.

Until 2016, it was nearly impossible to invest even a nickel in local ‘mom and pop’ businesses without special legislation for ‘carve-outs’. In 2012, President Obama signed the Jumpstart Our Business Startups (JOBS) Act, which allows companies to acquire funding through online portals from non-accredited investors (~97% of the U.S.). This was finally enacted in 2016 and opened the doors for crowd-sourced funding, making it possible to invest in the neighborhood bakery, farmers’ market, or food co-op, the people’s economy, more directly.

New opportunities to invest locally in Maine reflect national opportunities to strengthen local economies and smaller businesses. In Maine, prospects include crowd-source funding, and local investment clubs that are connected to the Slow Money Maine movement, which connects local agriculture to investors in Maine.  The Slow Money movement aims to redirect capital in the stock market into the sustainable, local food economy, thereby strengthening the local food supply chain of farmers, fisherman, and the food industry through low interest micro and small loans. The Slow Money movement and other innovations to localize and decentralize the economy are incremental steps moving in the direction of a stronger, more balanced agricultural system.

Nationally, conversations that bring activism such as DAPL divestment together with funding the new economy have yet to make a strong connection. The AED intends to spread the word about these opportunities to put our money where our values are and shed light on the steps towards economic democracy and sovereignty, not only for the well-being of the tribes, but for all sentient beings. For more information, visit aedmaine.org. 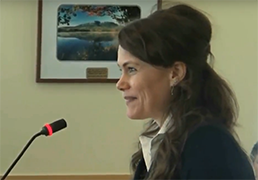 Shri A. Verrill co-founded AED-Maine with her partner
Alex, and works as an environmental conservation activist
and organizer within the Society for Ecological Restoration and the Maine
Association of Wetland Scientists. She holds a Master of Science degree in Biology
and owns a small business, offering ecological landscaping
and environmental consulting.

Alex Jackimovicz is an activist, spiritualist, and small businessman
living in Boothbay, Maine. A licensed master electrician,
he is also a co-founder of the Alliance for Economic
Democracy and a volunteer organizer with a variety of social
and economic justice campaigns and organizations, including
the Maine People’s Alliance, the Maine Small Business
Coalition, and the Maine Fair Trade Campaign.