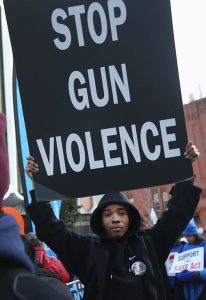 I know that everyone is familiar with the Second  Amendment, which gives us the right to bear arms for hunting, sport and defense. However, the weapons of today are greatly more powerful and easier to use than the heavy, difficult to load muskets of the 1700s.

Over the years we have written a range of laws to maintain safety. Currently we have federal laws that require licensed gun dealers to submit data for a federal background check on the buyer.  However, multiple studies have reached a conclusion that about. 40% of our sales go through without a check. This has been called the gun show loophole. Below a certain number of sales—Internet, individual, and so called “parking lot sales”, gun sellers are not required to do background checks.

This has given us what the American Medical Association has called a public health crisis of gun violence. Urban areas are especially hard hit. Chicago gets the most national attention, but per capita in losses to firearms, Chicago was only eighth among large cities, losing 693 people to firearms last year.

Many states have passed their own laws on requiring background checks for all sales, registration of firearms, and a range of other regulations. However, former Boston mayor Menino, for one, has complained that he can’t keep his city safer from gun violence with guns more easily obtained in Vermont and New Hampshire. There is what has been called an iron pipe line of gun trafficking stretching up North from southern states with looser laws.

We came close to passing strong background checks in the Senate in 2013 in the Manchin-Toomey bill, sponsored by a team of socially conservative Democrats from West Virginia and a socially conservative Republican from Pennsylvania, after the elementary school tragedy at Newtown, Connecticut. It was just four votes short of passing, with four Republicans crossing party lines.

A common pattern here is a lot of nationwide horror and pain after the large tragedies, a push for change, and moving closer to change. Missing here is that the horror at the daily losses across our country, is not shared as widely, but felt painfully locally. And in Amherst in the autumn we had a loss of a young father, by a man with a gun reported by the Gazette to be illegally carried.

In 2016 the thought was that after the election—we would pass universal background checks. Do we really want to wait for possible change in four years? There is a new spirit of activism and dissatisfaction nationally with the status quo.

In 1994 Congress passed the 10 Year Assault Weapon Ban, as part of a large anti-crime bill, but, unfortunately, it was allowed to expire in 2004. There is some controversy among hunters about that ban, but there is an overall consensus that the AR-15 automatic rifle, in particular, is appropriate for military use, but not in the civilian market, with its rapid fire, multiple high velocity founds, short muzzle and pistol grip. The designer of that weapon intended it for military use only, and the New York Times reported that he was shocked to see it being used outside the military.

I hope that here in our town and in the larger areas of the state and country that we can remind our federal representatives that we’re still concerned about these issues. And despite all the issues right now, that gun control must be addressed as well, to end the daily tragedies and the inevitable larger ones brought on by gun violence in this country.