Home news I Marched on Washington 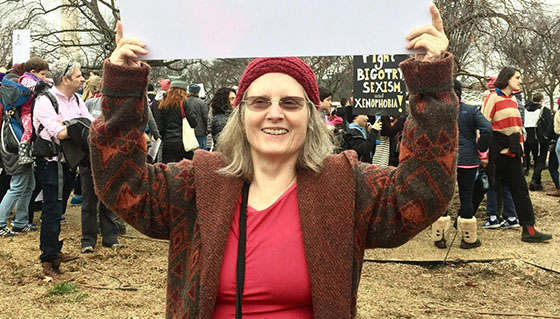 I Marched on Washington

This is a brief account of my trip north to Washington, DC, and how I ended up a day later, part of a memorial heap in front of the Trump International Hotel in Washington’s old Post Office Building.

My journey began with my creation at an Office Depot store in Greensboro, North Carolina, on Friday, January 20. The next morning, after an early morning drive up Interstate 95, I arrived at a Metro station just outside of the capitol city. I was carried by a group of four women: a silver-haired grandma, her daughter, and her daughter’s two young friends. A large gathering of women, some with husbands and children, had converged at the entryway to the station. The crowd formed a line, branching out along both sides of the “Kiss and Ride” lane. Every 12 minutes, the doors to the station would open and a loud cheer would erupt from the crowd, and the station’s security force would move hundreds of people inside the station to purchase their Metro tickets. They descended down onto the subway platform to wait for the next train bound for city center, as hundreds more swelled the lines outside the station.

Each time the subway platform reached its capacity, the authorities would close the station’s outer doors. The crowd standing outside would settle in to wait for the doors to open again. Strangers passed the time by sharing with others what was needed: hand warmers and snacks, introductions, and the port-a-potties. Most carried signs like me, raised above the heads of the crowd. Someone had even created an assortment of signs and left them on display at the head of the line for anyone to pick up and convey to the March.

Looking at all the signs in our path, I suffered the terrible fear of inferiority. Most of the messages around me were smart and amusing – “#Free Melania,” “Leave it to the Beavers,” “Sorry World, We’ll Fix This,” “We Shall Overcomb,” and “I Can’t Believe I Have to Protest the Same Old S**t,” the last sign carried by a delegate of the “over ‘60s” crowd. 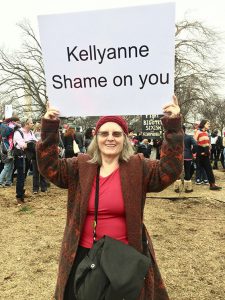 My message, sadly, was a serious one. Had I miscalculated? I worried, Will anyone understand me? Who would care? No mention of Donald Trump at all. Or, Mike Pence for that matter. No clever artwork.

One of the girls finally carried me under her arm into the station, where we were put on a crowded train and taken away into the city. After an hour-and-a-half ride which on any other day would have taken thirty minutes (lots of extra trains ran that day and clogged the tracks), we emerged from the Metro station at the Smithsonian Institute into a shifting sea of bodies. We were lost. Where was the stage? The speeches, the main event?

We were trapped in a crowd of people wearing pink “pussy hats” and chanting, “This is the way Democracy looks!” “We want a leader! Not a creepy tweeter!” At 1:15 the crowd in front of us began to move. Finally they hoisted me up and I took my place with the others. Taking slow, closely spaced steps, we marched, tightly bound together along Constitution Avenue, headed for the Washington Monument. For over an hour as the girls walked, they passed me around, and I held myself up high.

This is what I said:

Every few steps I was stopped! “What a great sign! Can I take your picture?” I posed for selfies, one after another, group portraits, thumbs up, broad smiles. I felt vindicated.

The March took a turn, then another. More cell phone photos of me! They didn’t stop. The crowd kept marching. Columns of people from different avenues merged with one another at the intersections. The crowd found new routes to take.

By four o’clock, the girls were exhausted; they couldn’t keep me in the air, their arms too tired to carry me.  Up ahead we saw a large swath of the marchers stop and turn toward the façade of an out-sized sand-colored building. Was anyone home behind its windows, all closed behind tightly drawn curtains? The beautifully groomed building seemed deserted, almost haunted.

Aha! It had a sign of its own, in golden letters: TRUMP INTERNATIONAL HOTEL. People started booing loudly. Outside on the sidewalk stood a low fence of what could have been bike racks in a more environmentally conscious neighborhood, but was probably just a moveable security barrier.  Someone in the crowd got an idea: Deposit Your Sign Here. One by one, those who passed by the entrance to the Hotel lobby dropped off their messages, many hand-drawn, and others with bold press-on letters. I was the best. After all, I was printed professionally in North Carolina by a sweet young clerk who wished he could have gone to Washington with me. As the girls dropped me off at the fence, I gave my last full measure of devotion in service to God and country.