In the wake of the London Bridge attack, I have been disturbed by the number of ‘leaders’ within my network who have been quick to jump to short term solutions, such as suggesting carriage of concealed weapons (CCW) as being the immediate solution to terrorist attacks. Now I understand that people need to feel like they can protect themselves, but often short term policies have long term consequences that you don’t see until it’s too late. In Systems Theory this is called ‘Fixes that Fail’.  The basic premise of systems theory is that everything is connected, and that if you make changes in one part of the system, there will be a flow on effect of changes whose outcome is determined by a series of complex interrelationships and interdependencies. In order to be a leader who helps to make the world a better place, it’s very important to understand the impact of various social policies on the ‘social organism’ (i.e., society) you are applying it to.

For example, if the problem is what to do about the rise in terrorist attacks in the UK, and a rebalancing is required to reduce terrorist attacks, then to introduce CCW policies might initially make people feel safe because they can fight back an attack with something other than their bare hands. But there are unintended consequences to such a ‘rebalancing’ action. Basic social science tells us that allowing citizens to be judge, jury and executioner on a day-to-day level, takes the responsibility away from police and puts it in the hands of citizens without the same level of training. This has further impacts if those citizens have unconscious bias (most people do), and society could see an increase in vigilante action, racially motivated deaths or manslaughter cases such as the Trayvon Martin case in the US where an armed citizen (George Zimmermann) shot and killed an unarmed Trayvon Martin after following him because he “looks like he is up to no good.” This would result in large portions of the community being more worried about racists with guns than terrorists, and lead to less overall social cohesion., e.g.,  the problem just gets worse.

Although the causes of home grown terrorism are still being discovered, there have been some successful models around the world that use proactive, longer term policies. For example the Aarhus Model from Denmark (1), anti gang strategies and community engagement (2). These may take longer to see results and so while it won’t in itself provide a quick fix (unlike increased police presence on the streets), it must be a part of the long term solution. Good leaders do their best to understand social science and the consequences of the policies they establish. Without this basic knowledge, leadership is reduced to a series of band aid solutions with unintended consequences. Thus the onus is on you, as a leader, to get educated and introduce policies that make the future bright again. 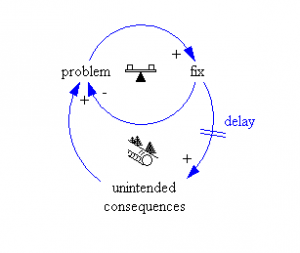 Satya Tanner had a 16-year

career as a pilot and aerospace
engineer in the Royal
Australian Air Force, leading
people and managing projects.
She has studied Prout at
a post graduate level and has
a passion for helping organizations
and communities that are in search of innovation,
leadership, healthy cultures and conscious
business principles.