From September 29 to October 1, 2017, thirty Proutists from New York Sector gathered at Ananda Girisuta Master Unit in Asheville, North Carolina, to participate in a weekend of discussion and planning. The event built on the work done last year in the first Prout Strategic Planning Seminar held in May, 2016. This seminar was the result of three months of meetings by a small planning team seeking to further Prout work in the sector. 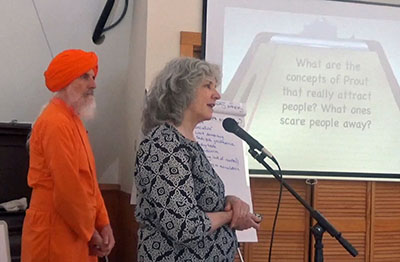 Beginning the seminar were reports from the three teams created at last year’s seminar. These teams worked on starting the proutusa.org website, policy advocacy papers, and organizational development.  On Saturday morning, participants listened to three presentations: “Designing a Prout Study Circle Manual” by Dada Maheshvarananda and Miirabaii, “Cooperative Internet Tools for Communication” by James Quilligan, and “Prout Analysis of  Leftist Latin American Governments” by Hiranmaya and Dada Maheshvarananda. Then Didi Devinistha led a brainstorming session about how to best rebrand Prout for the 21st century. 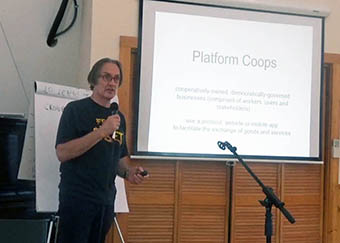 In the afternoon, we formed six teams that included work from the preceding years as well as new tasks that complemented the group structure which has been created at the global level. The six teams are: 1. Model Projects, which will research Master Units and cooperatives and work on development of these projects;  2. Movement, which will focus on networking with other activist organizations with common objectives with Prout/Samaja, and they will set up public events to promote their work; 3. The Office, which will handle the administration, financial and communication systems of Prout USA; 4. Policy, which will conduct research and create Prout publications; 5. Public Relations, which will utilize the ProutUSA.org website, Facebook, and digital media to promote Prout; and 6. Training, which will develop a Prout Study Circle curriculum, and film a series of 2-4 minute answers to Frequently Asked Questions about Prout. Throughout the rest of the weekend, these groups brainstormed possible programs and activities, and finally designed practical action plans for implementation. During the final session, all six groups presented their plans and discussed ways to coordinate and collaborate among one another. 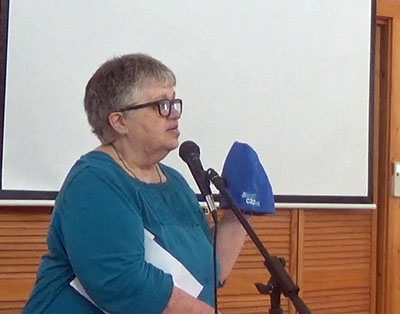 The evening program consisted of presentations that showcased existing Prout strategies and projects taking place in the United States. Ananta discussed work being done by the Alliance for Economic Democracy  in Maine; Jacelyn Eckman presented on the Economic Democracy Advocates, an organization the incorporates Prout principles in their work, and Hiranmaya and Tapan gave an overview of the cooperative movement in the United States. and how Proutists are contributing to its development.

Those attending the seminar decided to use Loomio software to keep in touch and continue their work for implementing their action plans. There was also a general consensus to organize another strategy planning seminar next year. Developing  a two-track seminar was also discussed, in which ideological classes could be held for those new to Prout, while those interested in implementing strategies and action plans could hold organizational meetings separately. It was also suggested to first hold different utilization camps, such as Prout, Education, and Pracar for 2-3 days and then to come together afterwards for a collective sectorial Ananda Marga retreat. Everyone was inspired and motivated to accelerate Prout work in the sector.