Spiritual Practice for Liberation: A Regular Column by Annie Girresch

“You must have a flaming moral purpose so that greed, oppression and exploitation shrivel before the fire in you.”  (Sarkar, P. R., The Jamalpur Years, p. 7). 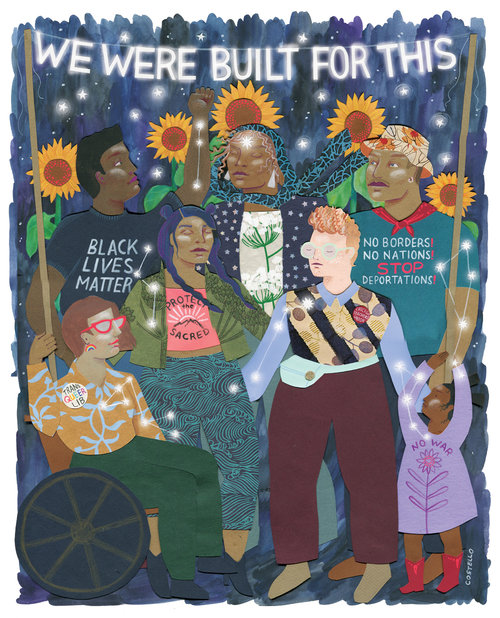 “Built for This”
Artwork by Molly Costello, http://www.mollycostello.com/

These were the questions we danced with at a recent St. Louis workshop, “Sowing the Healed Future.” During this day-long intensive, I got to sit at the feet of three powerful teachers who live at the crossroads of spirituality and social change: Rebecca Bennett, founder of Emerging Wisdom and co-chair of Missouri’s Forward through Ferguson Commission; Carolyn Griffeth, my spiritual director and practitioner of shamanic energy medicine; and Taya Shere, founder of the Kohenet Hebrew Priestess Institute. In a room full of activists and spiritual seekers of many faith traditions, this was a very juicy conversation.

Many spiritual traditions, especially in the West, have emphasized dualism—dualism of the mind and body, dualism of private and public responsibility, dualism of spiritual experience and material reality. Often in the U.S., religious folk avoid responsibility for societal oppression by claiming separation of church and state—let politics be politics, and let prayer be prayer.  It doesn’t matter how immoral Donald Trump’s policies or personal behavior become; evangelical Christianity continues to pledge its unwavering support.

Another way that I experience this is a deep rift between spiritual groups and those laboring for liberation from all oppression. My spiritual teacher, Carolyn Griffeth, talks about how these are often two completely different camps of people who are often at odds with one other. On the one side, spiritual folk want to meditate away from all of the world’s problems. Spirituality becomes that great “opiate of the masses”—even the liberal masses—that Karl Marx warned of. On the other side, those working for social change are so consumed by the struggle itself that they lose themselves. In their organizations and their interpersonal ways of being, they embody the very evils they are seeking to eradicate.

However, there are also traditions across the world that are born uniquely out of the re-unification of these parts. The beauty in PROUT is that it sees no separation: Sarkar  taught that our relation to the Supreme Consciousness necessarily calls us to build a healthy human society. In my last column, I talked about how working for liberation is a spiritual practice. Today, I’m reflecting on how our spiritual practice can ground us in the deep waters of abiding peace so that we are sourced enough to face the evils of our unjust society. 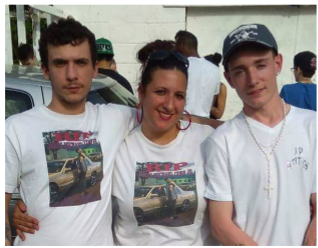 In the last few years, I’ve witnessed how exhausting and even traumatizing the work of social change can be for activists and organizers. One of the clearest examples I know of is the fight that Gina Torres has led for justice to be served for her son Isaiah Hammett, who is among the tragically long list of victims murdered by police. On June 7th, 2017, a St. Louis police SWAT team raided Gina’s home, killing 21-year-old Isaiah within minutes.  He rushed to protect his disabled grandfather, a Vietnam Veteran, from the incoming stream of bullets. Anyone who enters Gina’s home can see the bullet holes scattered through the walls and the floor, and the beautiful shrine she’s built to honor Isaiah’s life. Though the St. Louis police have claimed that Isaiah fired first, an independent forensic expert concluded that all shots fired—over 100 rounds—were directed at Isaiah.

Since last June, Gina has boldly publicized her grief in the fight for an investigation into this heinous crime. The St. Louis Police Department has dragged its feet in a supposed on-going investigation, and the city has withheld basic information and reports from the day of the murder from Isaiah’s family and their attorney. On June 7th, the family along with local activists  honored the one-year anniversary by holding a protest, in the form of a memorial, outside of St. Louis City Hall. Tragically, Isaiah is only one of many victims killed with impunity at the hands of police. This is the reality of the fight for liberation.

Where is God in the face of such evil?

I’m not sure I know the answer to that question, but I know that I see God in Gina’s fight to seek justice for her son. I see it too, in all of the mothers who bear this painful witness to a rotten system where those who are deemed protectors of justice become the most brutal perpetrators of injustice. And I know that my spiritual practice is what grounds me enough to keep showing up in love and support for this liberation struggle.

Photo of Isaiah Hammett and his mother, Gina Torres.  Borrowed with permission from Gina. 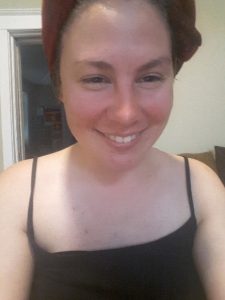 Annie Girresch is a lover of trees, an apprentice to the healing arts of the Web of Life, and a divinity student at Eden Theological Seminary.