Home Climate Birds I Have Known 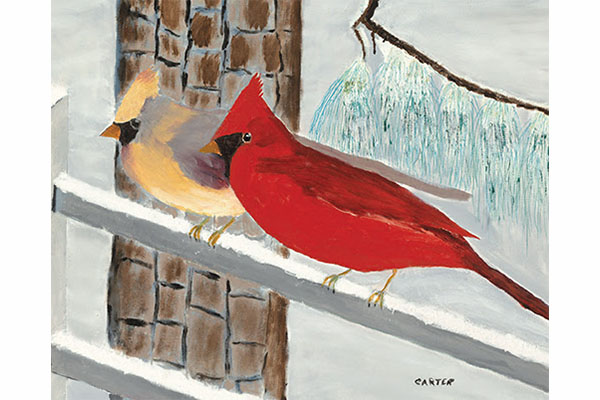 Birds I Have Known 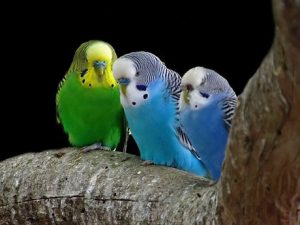 When I was a girl, my Aunt Mickie gave my brother and me parakeets. We had a male and a female, which I learned you can tell by the color on their nostrils, or ceres, above their beaks—blue for a male, brown for a female.  I delighted in watching them flitting around their cage. I would let them out to fly around the house sometimes, too, so they could stretch their wings.

Once Aunt Mickie gave us a canary, which we named for her, “Mickie.” Boy, that bird had some chops! He enchanted me with his song. One day I let him out to fly and went away from the kitchen where we kept his cage for a few minutes. Later, I heard a loud “Oh, no!” from my brother, Bill. I ran into the kitchen, and saw the disgusting scene of my cat, Tiger, licking his chops, yellow bird feathers sticking out of the sides of his mouth. Mickie was no more. Evidently, Bill had let Tiger in by the back door, not realizing that Mickie was out of his cage. After that unfortunate incident, Aunt Mickie didn’t give us any more birds. 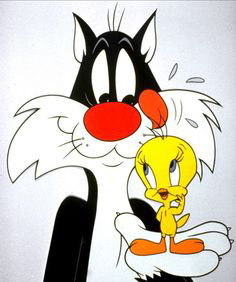 For many years I kept bird feeders, enjoying watching the many birds that swooped into my backyard to enjoy the seeds, nuts, and dried fruit in these feeders. At some periods, I had to refill the eleven feeders every other day to keep them full. However, I do realize that I was also keeping the local squirrel population from going hungry, as well, even though I kept trying to find ways to discourage those little buggers from eating all the birdseed. The most frequent visitors to my backyard were the red winged blackbirds. Sometimes my cat at the time, a smart, black Maine Coon, Milagro, and I would sit out back in the garden,watching  the birds as they flew in and ate the feed. He usually restrained himself and didn’t try to make the birds into a meal for himself! I was always surprised that the birds grew to ignore both me and Milagro as they chowed down.

I remember one blackbird that would often come down off the feeder and light other places in the yard. He’d sing what seemed to be especially for me. One day in autumn when the cool weather was spurring the birds to begin their yearly migrations, I was taking my dogs, a German Shepard/ wolf mix and a Chow/Lab mix,  for a walk by the pond across from my house. Milagro had followed us, as he was wont to do. There on the fence around the pond was a blackbird. As we approached, the  two big dogs, Bear, Bootsie, Milagro, and me, the bird did not fly off. Instead he began to chirp. I stopped a few feet from the wire fence to listen. The dogs and cat stopped and seemed to listen, too. After a minute or two of warbling, the blackbird took off, soaring up into the sky, joining a huge flock of birds flying overhead, heading southward.

Maybe I am just being sentimental, but I felt that that was the same blackbird that had paid me so many visits that summer and fall in my backyard garden. It seemed like he was telling me ‘good bye’, acknowledging that we were friends somehow, if humans and avians can be friends. To this day I still miss that red-winged blackbird.

Many bird species are endangered. Since the 1970s, North America has lost 3 billion birds, nearly 30% of the total, and even common birds such as sparrows and blackbirds are in decline, U.S. and Canadian researchers report this week online in Science .Bird Study Just as a canary was sent down a mine shaft to make sure the air was safe to breathe, now birds are harbingers, signaling a greater global crisis in other species, such as insects, frogs, and other wildlife.

Climate change adds to the threats from habitat loss and invasive species, as well as creating new challenges that birds must overcome. Michael J. Parr, President of the American Bird Conservatory, urges the keeping of cats indoors, using decals on windows to prevent bird collisions, and creating wildlife habitat around homes. He says, “I implore everyone who cares about birds to take action now, at this crossroads for birds and for all nature.”American Bird Conservancy 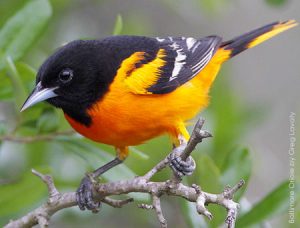 For those who have children, get them a birding book and a set of binoculars, and take your children birdwatching. They will grow to love the birds and their songs as I did when I was a girl fishing with my Dad. He knew the call of most of every bird by heart. Such a big, strong, burly man, but he loved to imitate the sparrow’s song or the call of a cardinal. Nature was in his blood. Let’s make sure the birds are around on the earth for our children’s children.