Mary McLeod Bethune was an education advocate throughout her life and was a civil rights and women’s rights leader. Bethune urged Woodson to establish the Negro History Bulletin.

In 1925, Woodson, in an effort to extend the popularity of this History Week, sent out a press release announcing Negro History Week in February, 1926. He chose February because Abraham Lincoln and Frederick Douglass were born in February, and he wished to build on the tradition of celebrations of the birthdays of two famous activists for African Americans. (Black History Month Origins).

Woodson wanted this commemorative history week to be more than about these two men, however. He wanted to focus on the achievements of black men and women who had contributed to the advance of human civilization. In the 1920s Negro History Week caught on in the country—in schools and before the public, and it continued to become more and popular in many schools and communities. Mary McLeod Bethune was an important African American educator, civil and women’s right advocate, an adviser to President Franklin Roosevelt, and founder of a college.  She urged Woodson to establish the Negro History Bulletin, which promoted this new holiday. In the 1960s, Black History Month replaced Negro History Week in many localities. In 1976, fifty years after the first celebration, the Association promoted shifts from a week to a month and from Negro history to black history. Since the mid-1970s, Black History Month was proclaimed by every American president. It is often referred to as African American History Month, due to the changes in current politically appropriate designations for the month (Black History Month Origins).

According to the NAACP (National Association for the Advancement of Colored People), here are some good ways to celebrate African American History Month:

I urge you to choose one or more of these actions to pay tribute to the culture and contributions of African Americans. Carter Woodson, the founder of this celebration, wanted to have a Black History Year. That sounds like a good idea to me. 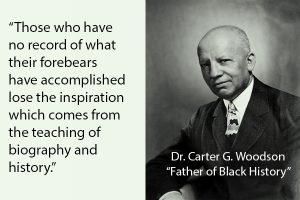