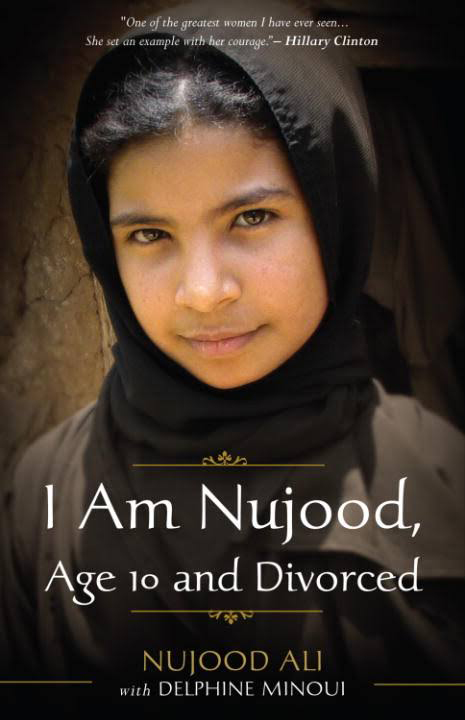 I Am Nujood, Age 10 and Divorced, by Nujood  Ali

“One of the greatest women I have ever seen…she set an example with her courage.”   Hillary Clinton

How did you spend your childhood?  Going to school, reading, playing with friends, going to camp, travelling, family outings? Not the case for Nujood, a little girl from a small village in Yemen who was forced into marriage at the age of ten, to a man three times her age.

Nujood was physically and emotionally abused by her husband and mother-in-law.  She felt abandoned by her family since even her mother provided no support.  She turned to her father’s second wife for guidance.  After hearing Nujood’s story, the woman directed Nujood to go to the courts to plead her case, asking for a divorce.  Imagine – 10 years old!

Nujood  had  to run away in order to make this happen.  She knew nothing about the city or location of the courthouse.  As good fortune would have it, she reaches her destination.  There she meets several people who are sympathetic to her cause, including a female lawyer, Sada, who upon hearing Nujood’s horror story, accepts the case and vows to heal the wounded child.

Nujood set a precedent for young girls living in countries where marriage at a very young age is commonplace. After her divorce was granted, Nujood became something of an international figure.  She was allowed the freedom to go back to school.  Her desire is to become a lawyer so she can help girls who find themselves in similar circumstances.

This book reveals what life is like for thousands of young girls who live in repressive conditions.  Many countries, in addition to Yemen, follow similar patterns with regards to marriage – with fathers contracting their young daughters, selling them to men 2, 3 even 5 times older than the girls.

Nujood’s story is one of bravery.  She displays wisdom and maturity well beyond her age.  Hers is a remarkable story and an eye-opener.